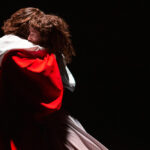 Maciej Kuźmiński – a guest choreographer of ArtEZ University of the Arts

Rehearsals for Maciej Kuźmiński’s diploma film with first-year students of the ArtEZ in Arnhem in the Netherlands are underway. The work was originally intended to take the form of a… Read more »