My name is Daria Koval, I am 27 years old, I am from Dnipro city in the East of Ukraine. When the war started I was in Kyiv. [...] I thought that I would never dance again, because I realized that dancing is nothing important anymore [...] Every time I dance about the war in my country I hope that maybe once I will not feel this pain anymore, that I will dance everything out...

For the new solo Resistance Movement Maciej Kuźmiński works closely with a refugee dancer from Ukraine Daria Koval, documenting her experience of war in voice and movement. Before Maciej and Daria worked together on the performance Every Minute Motherland, which premiered in August 2022 and was also attached to the topics of experiencing and witnessing the war.

“For me this work is very important, because I wanted to tell about the war from my own perspective and share my personal story”, says Daria Koval. Her intention coincided with the one of Maciej Kuzminski, who, by his own words, felt that after symbolic Every Minute Motherland, he should also appeal to “a direct statement from a concrete person, because war is not abstract and affects real individuals”. 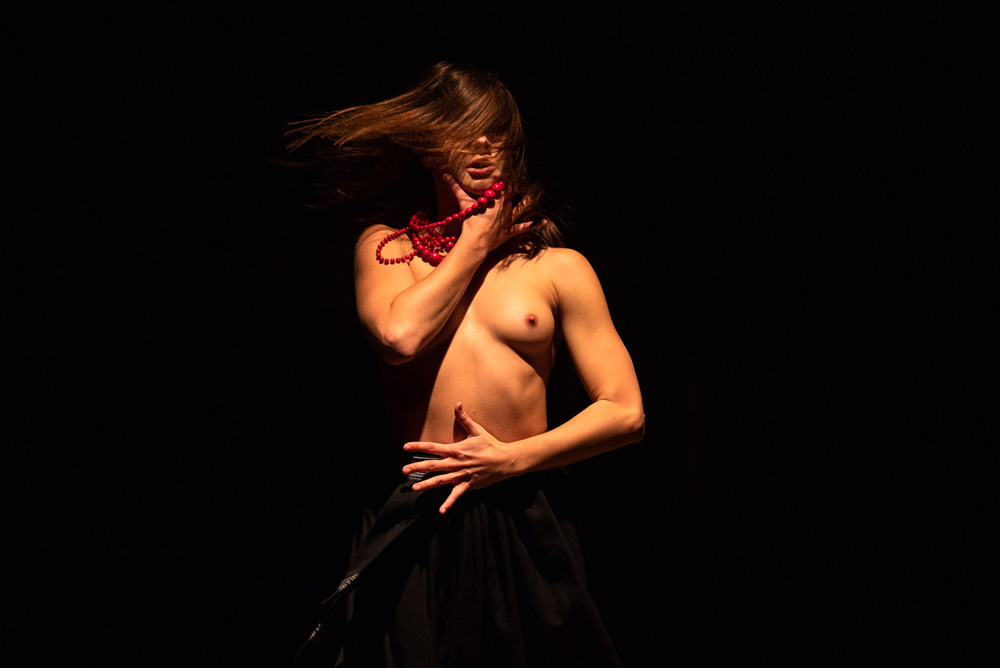 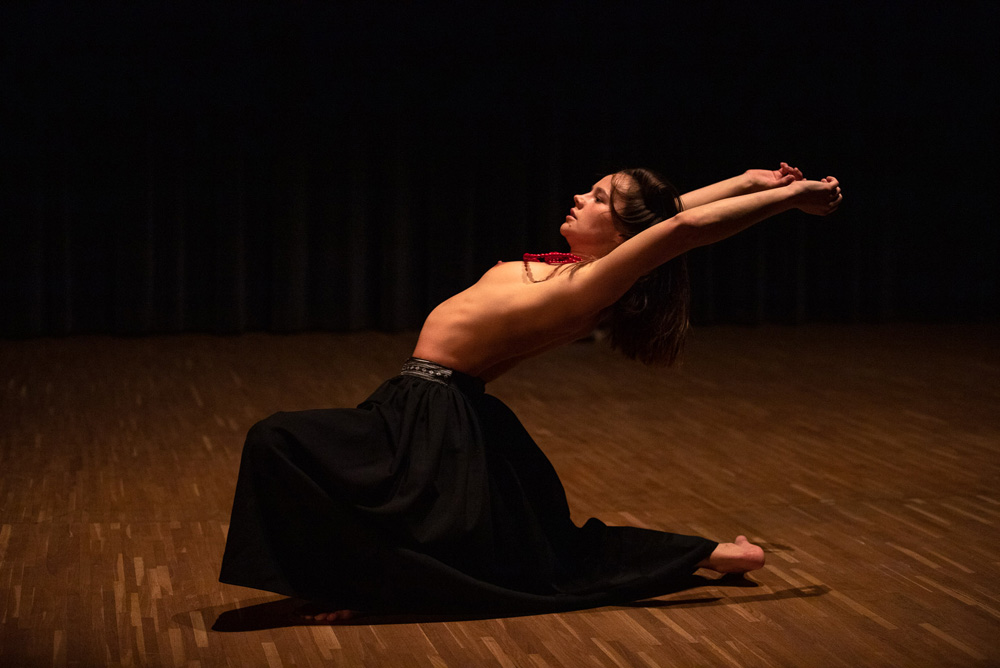 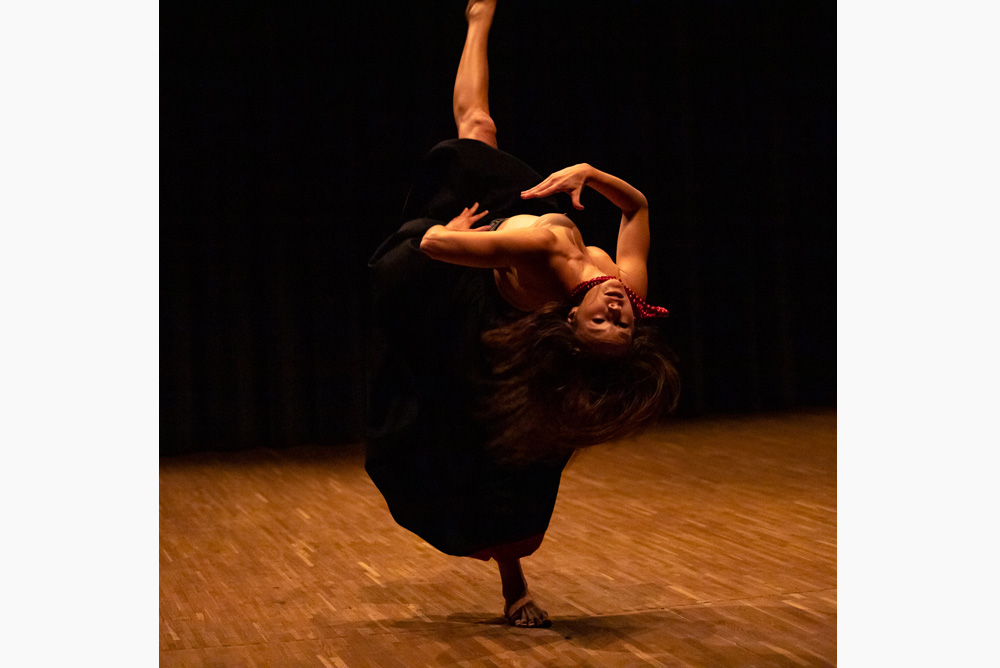 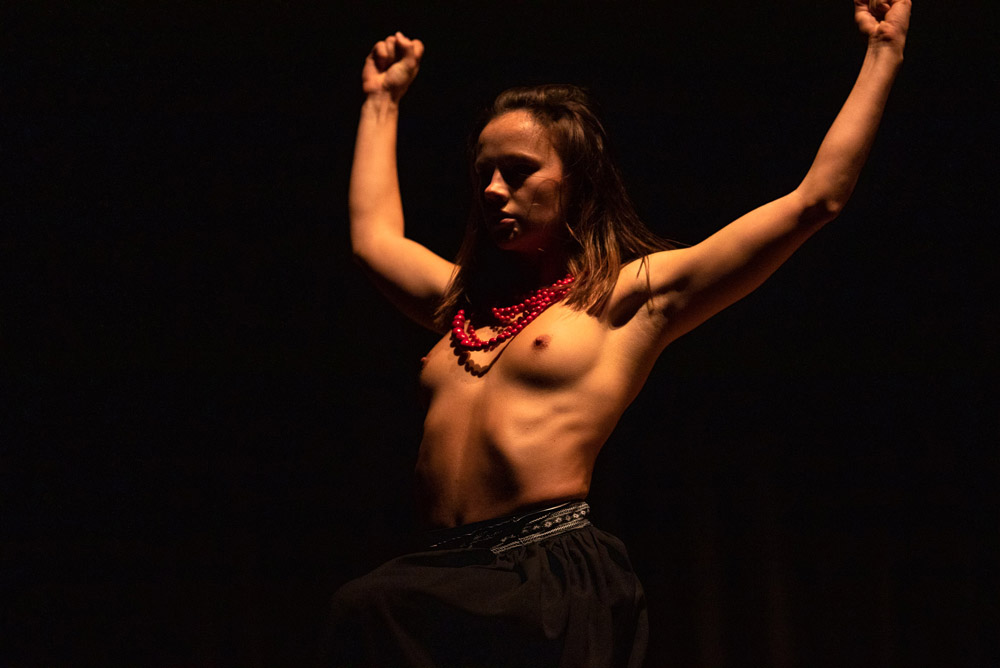 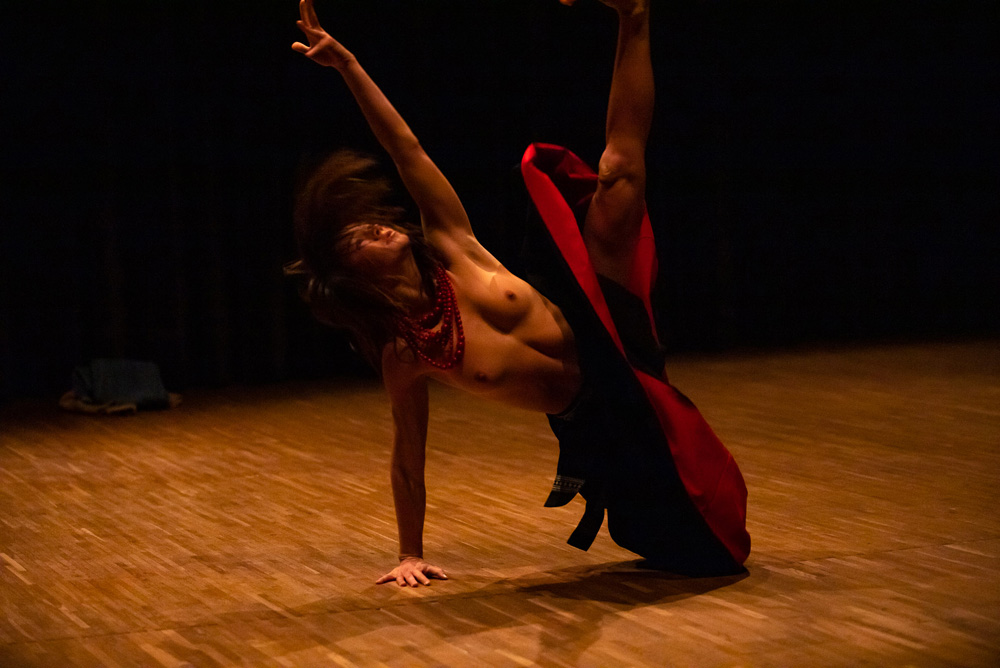 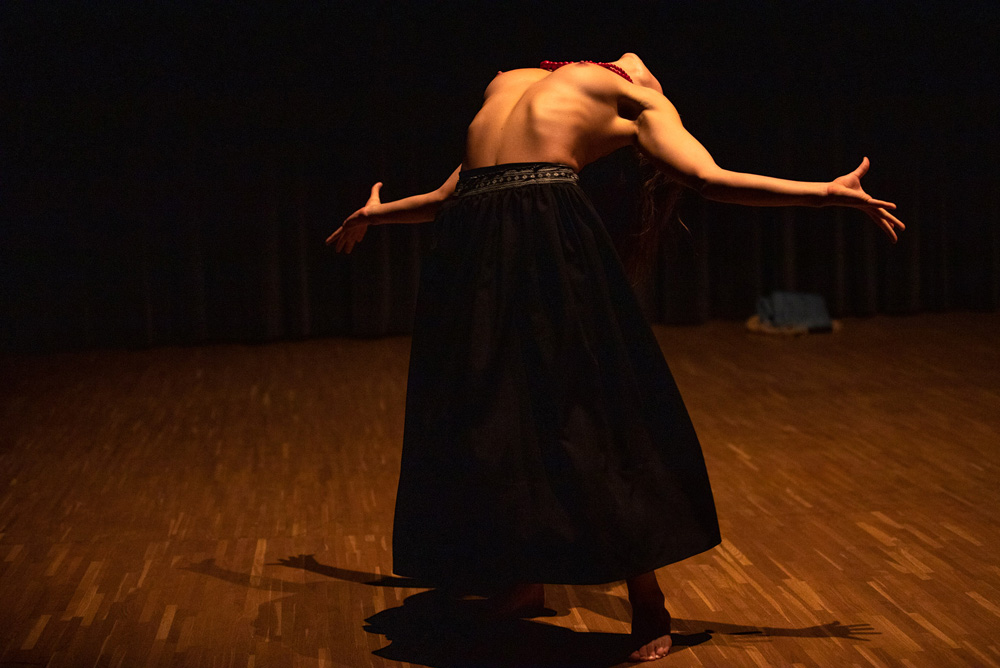 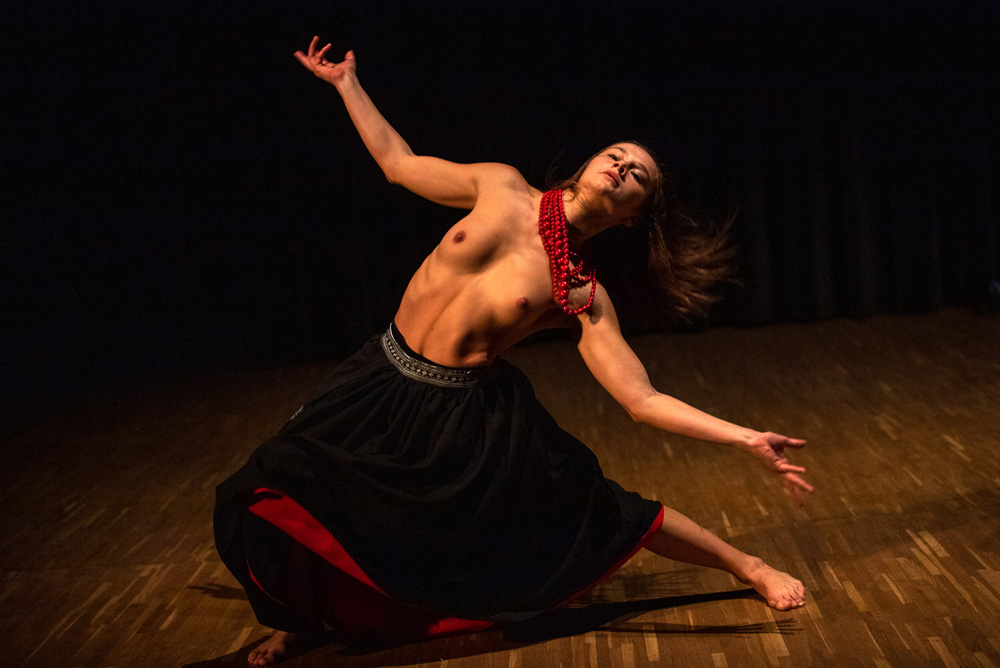 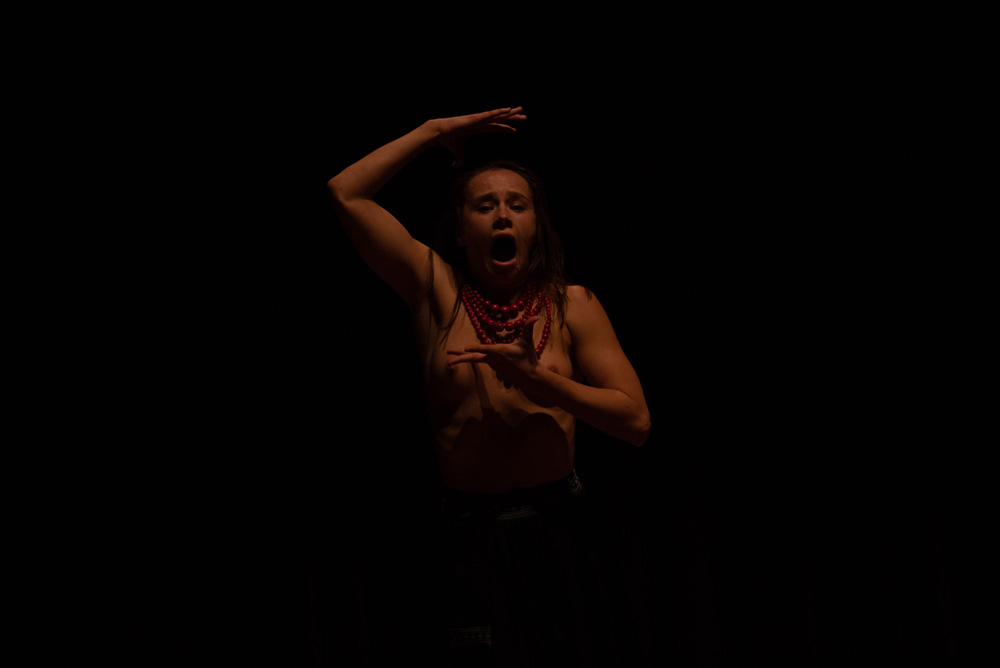 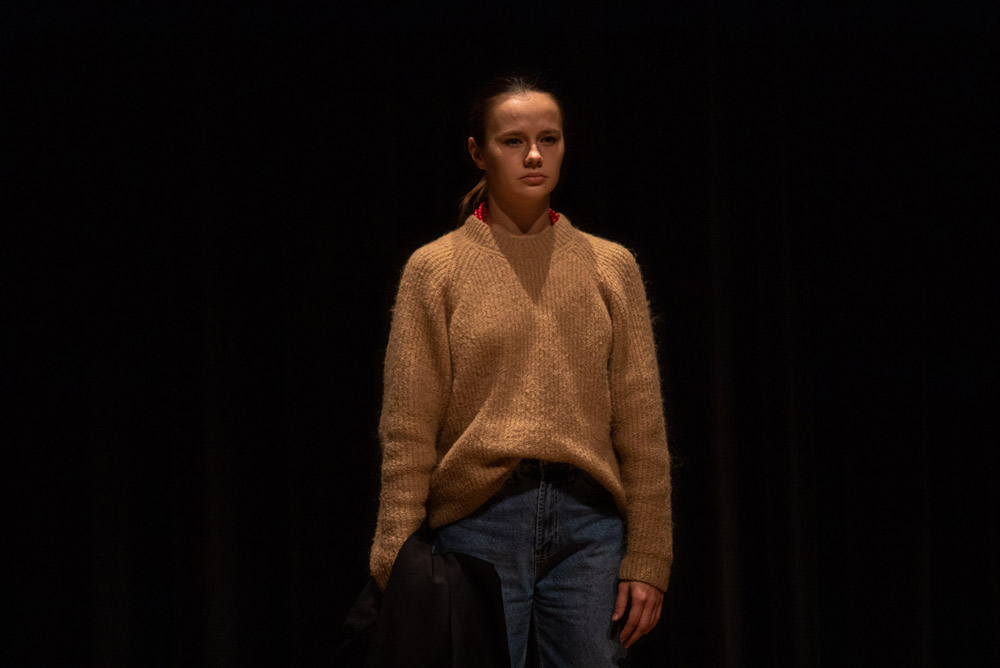 The documentary work, based on interviews with Daria and shared movement research, was created in 2 weeks. Started as a frank exposure of the dancer's personal story, the solo develops into a ritual, where Daria, half-naked, but wearing embroidered skirt and traditional necklace, reveals the power behind sensitivity and the strength in recognition of her roots.

“I start in my real clothes, which I was wearing, crossing the border, and then change to an attire with traditional elements”, tells Daria. “I wanted to perform in a costume, which could make me feel closer to my family and home, even from far away abroad. And at the same time I wanted to show that we could never know what an average-looking person we meet on the streets may carry inside”.

“This was a very close collaboration, where we discussed every aspect”, recalls Maciej Kuzminski. “For example, we decided to include a sequence of Daria’s own choreography, created before February 24, which symbolized her past life, gone forever”. Daria herself says that nowadays it is impossible for her to dance about anything else apart from the war: “I cannot express all the longing I have in my soul with words, I can only dance it. And also being naked on stage for me is one of the attributes of honesty, frankness and strength to resist the destruction of war that is still going on”.