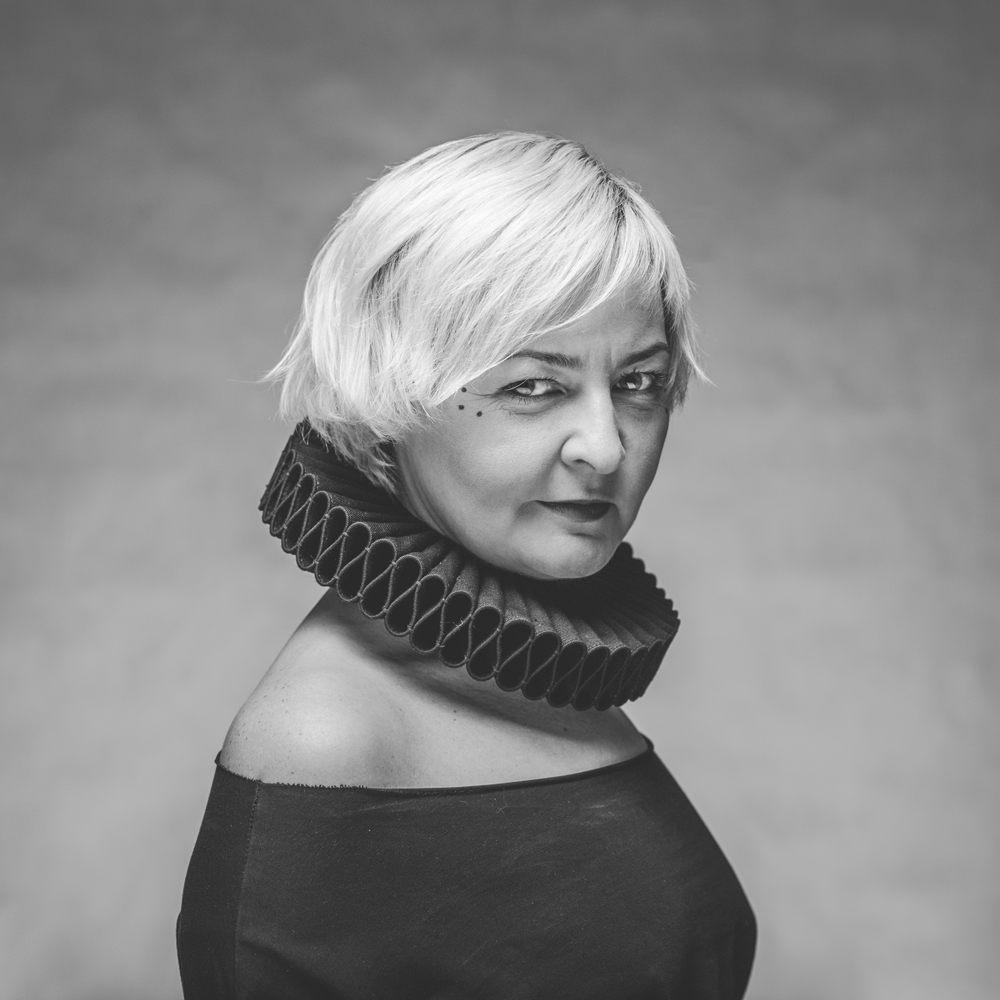 Costume designer, stage designer in dramatic, music and puppet theaters. In dance theater and film. Author of collages and installations. Her graduation work costumes and set design for the play Ubukról, or Poles, won the Main Award in the National Competition for the Best Diploma in Scenography. She is a scholarship holder of the Lviv Academy of Fine Arts in the Glass and Jewelry Design Studio.
In dramatic theater, she received recognition among others. costumes for the performance of Iwona, Princess of Burgundy W. Gombrowicz, directed by Artur Tyszkiewicz, for which she received an award at the XXXI Opole Theater Confrontations. She was honored with the Award in the 10th National Competition for the Exhibition of Polish Contemporary Art for the set design and costumes for the show 36.6 directed by Adam Ziajski. Cooperation with the puppet theater resulted in another Award for the visual setting for the performance Świetliki (Białostocki Teatr Lalek) in the 2nd National Competition for Theatrical Staging of Old Works of European Literature.
Ilona Binarsch designed for the TV Theater costumes for the poetic performance of Umarla from the Spoon River directed by Jolanta Ptaszyńska.
Her collaboration with Michał Znaniecki for the Wrocław Opera was widely heard, where she prepared costumes for G. Dionizetti's Love Drink as part of the Summer Opera Festival on the Water and Otello G. Verdi.
She also worked on the Polish musical premieres: Producers (2009) directed by Michał Znaniecki, Wonderful Town (2011) directed by Zbigniew Macias and the Nun in Disguise (2016), Witches of Eastwick (2018), the Addams Family (2018) directed by Jacek Mikołajczyk.
With Robert Talarczyk, she made the musical My Fair Lady (2013) at the Silesian Opera and the plays Meat Art (2015), Around the World in 80 Days. Back and forth (2016), Invasion of Lizards (2017).
The artist also received the Artistic Scholarship of the City of Poznań for achievements in the field of scenery and costume design as well as the Artistic Award of the City of Poznań in the above-mentioned field.
In 2010, the film Ewa directed by Ingmar Villqist and Adam Sikora, for which she prepared costumes, was awarded the prize at the Era New Horizons International Film Festival in Wrocław. Cooperation with Ingmar Villqist had its continuation on the performance Love in Konigshutte (2012). She collaborated with Jolanta Dylewska and Edward Eller on the Polish-Israeli film production Silver Fox Felicja T. In 2013, Ilona Binarsch worked with Zbigniew Libera on his feature debut, Walser.
In 2017, the premiere of the film "Stars" directed by Jan Kidawa-Błoński and Invisible directed by Paweł Sala, for which she prepared costumes. In 2018 she was nominated for the Golden Mask for the set and costumes for the performance Wanda directed by Maria Sadowska and Joanna Grabowiecka.
The artist cooperates with the Kabaret Moralnej Niepokoju. She is also the author of costumes for the first season of the President's Ear.
Ilona Binarsch's works have been exhibited at many exhibitions, including at a collective exhibition at the City Gallery in Zakopane (on the fifth anniversary of the death of Władysław Hasior) and at the SOLVAY Center for Contemporary Art in Krakow. She was also invited to participate in the exhibition at the 1st Biennale of the Art Environment - in Poznań.